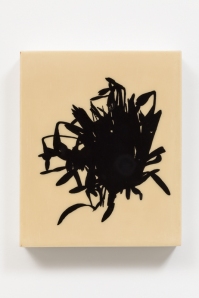 While more and more front gardens are paved over to accommodate the family car fleet – some suburban London streets now resemble parades of second-hand dealerships –  Britain’s motorway verges and hinterland grow increasingly variegated and wilder by the year. Artist Edward Chell’s exhibition of new work, Soft Estate (currently at the Bluecoat in Liverpool, before going on to Spacex in Exeter), celebrates as well as explicates the growing importance of roadside flora and fauna, in a series of paintings (some made with road dust), prints and objects (including etched car components).  It is both colourful and thought-provoking.

Like Patrick Keiller’s terrific 2012 Tate Britain exhibition, The Robinson Institute, the catalogue of which, The Possibility of Life’s Survival on the Planet, was an intellectual and political landmark in its own right, so Edward Chell’s catalogue-as-book, Soft Estate, contains three significant essays – by Sara-Jayne Parsons, Richard Mabey and Chell himself – which really take the argument forward about the residual influences of the Picturesque on current and future ecological systems.

Clearly the speed at which the modern traveller is propelled through the landscape differs from that of the occupants of a horse-drawn carriage. Yet, as Chell demonstrates, many of the tricks used by Humphrey Repton and his peers – the arched bridges, the judiciously placed reveals, the sudden vistas, the line of beauty – are today consciously echoed by the best of road engineers when designing anew. Soft Estate provides several artful juxtapositions of 18th and 21st century illustrations of roadways, almost identical in their palisaded curves and prospects.

Tree-planting and wildflower sowing on an industrial scale characterise the contemporary British road system today, principally with a view to softening the experience of fast, high density travel.  Most of us will only ever see these marginal gardens at speed and through glass – they are not immersive landscapes in any way. Of equal emotional significance are the roadside memorials or shrines now placed to commemorate accidents and fatalities.  Driving recently into Cambridge along a dual carriageway, the verges were way-marked by elaborate shrines at requent intervals – an erstwhile Appian Way of crosses and cairns.  Chell’s exhibition and book alerts us to these new forms of cultivated (and occasionally sacralised) landscapes which have emerged almost by default, but now form part of the new English countryside.

Soft Estate by Edward Chell is published by the Bluecoat, and is available from Cornerhouse

In the July 1939 edition of The Countryman, writer Sylvia Townsend Warner described how she fell in love with the Essex marshes. On a visit to Whiteley’s Department Store in 1922 she bought an Ordnance Survey map of Essex, simply because of the unusual place names and the fascinating blue/green configuration of the coastline. A few weeks later she took a train from Fenchurch Street to Shoeburyness, and then a bus to Great Wakering, where she walked to the River Crouch.  Caught in a thunderstorm, she was rescued by a farmer and his wife who gave her tea, dried her clothes, and told her about their lives. Her next trip took her from Liverpool Street Station to Southminster, and from there a walk to the River Blackwater, again finding a scene of empty skies and utter tranquillity. She stayed overnight on a farm at Drinkwater St Lawrence, making life-long friends of its owners.

These private expeditions and the deep impression they made upon her resulted in the novel, The True Heart, first published in 1929, set on a small island she disguised as New Easter, clearly one of ‘the Essex archipelago’ near Great Wakering –  namely Havengore Island, Foulness Island, New England Island, Potton Island, Rushey Island and Wallasea Island – all still isolated and mostly off-limits. Warner briefly alluded to the origins of The True Heart as a result of her early Essex outings in her introduction to the first edition. In 2012 Black Dog Books included the hitherto unpublished essay on ‘The Essex Marshes’ in With the Hunted: Selected Writings, and this gives a much more dramatic picture of her deep attraction to a landscape where, ‘I knew that mysterious sensation of being where I wanted to be and as I wanted to be, socketted in the universe, and passionately quiescent.’

Not only did the marshes and saltings enchant Warner, she was intrigued by a religious sect she found there, The Peculiar People. This had been established in 1837 by a farm worker from Rochford who allegedly had a revelation after falling into a ditch one night, drunk. The church grew rapidly amongst the rural Essex poor, though not without controversy. Like the Plymouth Brethren, the Peculiars eschewed any kind of professional medical intervention, believing that all such matters were in God’s hands, and on those occasions when young children died, who might have survived with proper treatment, they understandably incurred the antagonism of their neighbours and fellow workers.

This congregation was unique to Essex, and thrived separately for over a hundred years, only reuniting with other nonconformist churches in the 1950s, eventually becoming a member of the Union of Evangelical Churches, under whose auspices some chapels continue to worship. In The True Heart the meetings of the Peculiar People ‘took place in a parlour and finished with seed cake.’  This was unusual, because the sect was remarkable in the number of chapels it built between the Essex marshes and east London, some 43 in all, several of which still stand.

I lived next door to a Peculiar chapel in Daws Heath, Thundersley, in the 1960s, and not surprisingly was intrigued by their name and the mysterious nature of their religious beliefs and observances.  It soon became obvious they were almost indistinguishable from most other nonconformist congregations: teetotal, fond of rousing hymns, modest in their dress and lifestyle. That chapel has now gone, but the chapel in Tillingham near Bradwell still displays a notice board proclaiming it to belong to The Peculiar People, while nearby at Steeple, there is a beautiful Peculiar chapel which I came across walking from Maldon to Southminster several years ago, now converted to a private house.