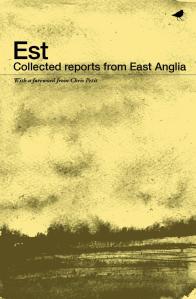 Dunlin Press is a new independent press based in Wivenhoe, and it has just published a first anthology of writing, Est: Collected reports from East Anglia. Forget the obligatory nod to psycho-geography, these are finely crafted love letters (and some very good poems) dedicated to the landscape and history of the eastern counties, with Essex coming into its own. When in later years people ask, what did you do in the nature writing wars, anthologies such as this will show that it was possible to express sentiments of attachment and loss – in the portrayal of place and the natural world – without being found guilty of emotional self-indulgence.

A number of the contributors have studied or taught at the University of Essex, so whatever they put in the water there, it clearly works. The phrase ‘cinematic skies and revolutionary winds’ comes from Chris Petit’s foreword, in which he also makes the claim that in filmic terms, he had always admired the region’s notorious flatness as ‘a way of eliminating class nuance, the bane of English cinema’, which hadn’t occurred to me before but makes sense if you think of how too often the English class system is signalled through the use of landed estates, rolling hills and dressed stone country houses. David Southwell finds in the coastal footpath along the Dengie peninsula – in a set of memory traces entitled ‘The Empty Quarter’ – the edge, and indeed, the end, of national narrative.

Melinda Appleby recalls her mother’s childhood memories of growing up in Dengie before the Second World War, in a flawless short essay on ‘this salt kingdom’. Her mother’s recollections were triggered by the mounting block in the Anglican church at Bradwell, though my attachment to this lonely quarter of the world has always been stirred by the simple four-square chapel of The Peculiar People in adjacent Tillingham, sadly reduced to a pile of rubble when I last cycled past it several years ago. Adrian May name-checks The Peculiar People, a non-conformist sect unique to Essex, in his brief overview of the connection between Essex folklore and the vibrant music scene of the southern limits of the county, in which he has played no small part. Fellow poet and musician, the ever chippy and chipper Martin Newell, admires the truculent spirit of Colchester and its suburbs, ‘perennially up-for-it’. Newell pays homage to the bitter north-easterly winds scything the eastern flatlands as character-forming, though in high summer it is the same wind which accounts for some of the most perfect clear-skied days.

Several contributors share Melinda Appleby’s anxieties about the continuing ‘thinning out of nature’, as species decline, bird numbers fall, and once familiar woodland flowers no longer appear. There may be fairies at the bottom of the garden but there are furies too. Chris Maillard recounts the destruction of Eden, when new neighbours move in next door and uproot a long-established garden with fruit trees and a rich array of flowers and shrubs, all reduced to bare earth in under an hour by a hired digger. As with Chekhov, the grubbing up of orchards tends to signal the end of the old ways of life, though happily not beyond recuperation.

Anthologies are often hit and miss affairs, but Est is uniformly excellent, a genuine contribution to East Anglian life and landscape. Auden once wrote that a good poem should be like a well-wrapped parcel – if dropped it should still hold together and remain intact. This anthology does that: well-edited, well designed, and unbreakable.