My House of Sky

Fifty years ago this month, in December 1967, a somewhat reclusive office-manager living with his wife in a council house in Chelmsford received a telegram informing him that he had been awarded the prestigious Duff Cooper Memorial Prize. This was for an outstanding work ‘in the field of history, biography, politics or poetry’, and followed shortly after the Yorkshire Post’s ‘Book of the Year’ award. The publication was called The Peregrine. Its author was J.A.Baker, or John Baker as he was known to family and friends, and carried the dedication ‘To My Wife’.

Sadly Baker’s fame was short-lived. He suffered from chronic ill-health, but such spare energies he possessed were spent on the great passion of his life, and that was bird-watching in a landscape that he marked out and inscribed as his own: east of Chelmsford along the River Chelmer and out to the Blackwater Estuary. For most of his adult life he walked and cycled this barely populated waterland, but in his last years of failing health his wife Doreen drove him to his favourite haunts by car.

In recent years the reputation of The Peregrine has grown to international proportions. Film-maker Werner Herzog makes it one of the three books all his students are required to read. This revival of interest owes much to Robert Macfarlane, Mark Cocker and John Fanshawe, as well as to the decision of the New York Review of Books to re-publish The Peregrine in 2005. I remember at the time asking Robert Macfarlane – who contributed the introduction to the NYRB edition – what he knew about Baker, and Macfarlane’s honest answer then was ‘not very much alas, very little seems to be known.’

All this has changed. With the publication this month of Hetty Saunders’ beautifully written and illustrated My House of Sky: The life and work of J.A.Baker, we can now appreciate the man – supported by the ever-present Doreen – who despite considerable personal difficulties produced one of the most ecstatic works of human defamiliarisation in the English language.

At a packed book launch at the LRB Bookshop recently, Saunders, Fanshawe and Macfarlane, chaired by Gareth Evans, each spoke in awe-struck tones of the continuing power and intensity of Baker’s writing, now supported by an extensive archive of Baker’s letters, diaries, maps, photographs and artefacts collected together at the University of Essex, examples of which are reproduced in the book together with a series of photographs by Christopher Matthews.

Two themes dominated the evening’s discussion. The first was Baker’s increasing animistic identification with the world of the peregrine; it was raised by one audience member asking: ‘Is The Peregrine about the bird or about J.A.Baker?’ The consensus was that it was both – that the two were somehow indivisible. The second was the degree to which Baker’s own ‘optics’ were those of someone who had taught himself to see from above. It was noted that he possessed a large collection of Ordnance Survey maps, the contour lines of which often heavily underlined, together with a collection of aerial photographs of the Blackwater estuary and peninsula. 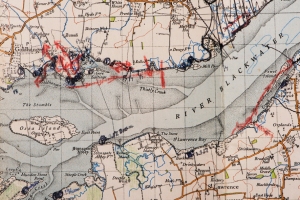 Detail of one of Baker’s Ordnance Survey maps marked with contours and peregrine sightings. The map forms part of the J.A.Baker Archive at the University of Essex.

Normally in aesthetic terms this view from above is associated with Futurism, and I think there is a futuristic element to Baker’s writing, strange as it may seem. How else explain descriptions such as:

​‘…the peregrine lives in a pouring-away world of no attachment, a world of wakes and tilting, of sinking places of land and water. We who are earthbound cannot envisage this freedom of the eye. The peregrine sees and remembers patterns we do not know exist: the neat squares of orchard and woodland, the endless varying quadrilateral shapes of fields.’

I was prompted to these thoughts by Robert Macfarlane’s suggestion – citing the poetry of H.D. and T.E.Hulme – that while Baker loved the Romantic poets, his own work showed the influence of Imagism. Macfarlane also threw in Cubism as another ingredient, which itself had strong connections with Futurism. This aerial perspective – of vertiginous, multi-planar landscapes seen from the air at speed – is the characteristic subject of the ‘Aeropittura’ paintings of Italian futurists such as Alessandro Bruschetti, Gerardo Dottori and Bruno Tato. So perhaps Baker’s aesthetic was a sighting of that rare species: rural modernism?

My House of Sky is a poignant work, suffused with a dogged wish to understand the natural world and all that’s in it. Everybody associated with its publication should be congratulated. While there are still homes with bookshelves, and bookshops happy to fill them, then Baker’s iridescent masterpiece will always have a place in the canon of expressive nature writing. As he wrote in the opening pages of The Peregrine, ‘It is a dying world, like Mars, but glowing still.’

For more details about My House of Sky and to order the book, go to Little Toller Books https://www.littletoller.co.uk/shop/books/little-toller/my-house-of-sky-hetty-saunders/