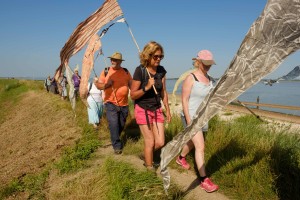 The Beach of Dreams project is a 500 mile ‘collaborative walk’ from Lowestoft to Tilbury this summer, organised by Kinetika, a much-admired arts and design organisation that specialises in hand-painted silks and flags (based on the long-standing carnival work of Director, Ali Pretty). Kinetika works with communities to explore a sense of place and identity: on this occasion to draw attention to the rich history and topography of the East Anglian coast and its many shoreline settlements. I joined the walkers for Mile 304, having been invited to write and tell the story of St Peter’s Chapel and the adjacent Othona community at Bradwell-on-Sea. This piece is printed below, inspired by a small detailed photograph of the south wall of St Peter’s, with its Roman and Anglo-Saxon building materials.

And withal, a great silence

We live in a material world, in which geology has for the larger part of human history been the single-most important influence on human settlement. On the southern aspect of the bend of the Blackwater estuary where it flows into the North Sea, lies St Peter’s Chapel, on the site of the former Roman fort of Othona, and adjacent to the modern Christian settlement of the same name. Looking across the mouth of the estuary to Mersea Island, one can see the sand-cliffs and beaches at Cudmore Grove that have provided a treasure trove for fossil hunters, finding traces of a time when monkeys, bears, elephants and hippopotamuses walked this shoreline, though it wasn’t a shoreline then. Until 12,000 years ago people could walk from Bradwell-on-Sea to the continent across Doggerland. Today the North Sea swirls around the East Anglian coast and its estuaries, endlessly shifting the contours and coastline in its wake. In such strongly tidal landscapes, everything is in constant flux, which is why it exercises such a compulsive need to go there, especially when life in town becomes too fraught.

I have been returning to Bradwell-on-Sea since the early 1960s, when I attended a political summer school held at Bradwell Lodge, then home of the colourful and often controversial Labour MP, Tom Driberg. Ever since, walking this particular stretch of shoreline has been a place of wonder and escape. In recent times I have tried to make a point of visiting the modern Othona community tucked just behind the seawall here, as part of a long-term interest in the social history of Essex, and its tradition of alternative communities, sanctuaries and retreats. When the founder of the community, former RAF padre Norman Motley, came to this small, isolated promontory in 1946, he knew immediately he had found the setting for the retreat he had dreamed of during the war: a place where British and German Christians could come together in a spirit of reconciliation.

‘On that vivid afternoon we came under the spell of that ancient building and of the whole area of the Blackwater Estuary. St Peter’s is situated a few hundred yards from the south shores of the river at the point where it enters the North Sea. There, one can breathe. The land on which we stood is almost a peninsula, with the mile-wide estuary to the north and Bradwell Bay behind – and all round, and curving to the south, the North Sea. The cry of the curlew was heard, and a variety of maritime flora and many sea birds were evident on the saltings; and withal, a great silence.’

History is an accretion of events, changing ways of life, and relationships with landscape and forms of settlement. The photograph below, a detail of the south wall of St Peter’s, captures for me something of this accretion in its most essential forms. Historian David Andrews describes the materials used include ‘tufa, septaria, ironstone and a variety of limestones.’ Some were imported from other parts of Britain, and possibly France, others were excavated locally. In addition, as you can see in the photograph, there are also flints and fragments of red tile, which along with the other materials, were once part of the Roman fort, later re-used. Even some of the mortar is Roman in origin and has been re-used, and still holds everything in place and true. 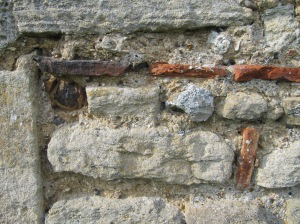 At Othona next door the idea of using everything to hand for building anew is now part of the community’s environmental ethos. The settlement is off-grid and supplies all its own energy as well as recycling all waste back into the natural cycle.  The new dormitory block is made of rammed earth excavated from the ground beneath, and is raised above ground level in anticipation of future flooding. Looking both to the past and the future, this small stretch of coastline is a place of memory but also offers an endowment for the future.

Watching the walkers leave for the next stretch along the seawall to Burnham-on-Crouch, I didn’t envy them. The long, narrow and sometimes overgrown embankment, curves a wide fifteen-mile arc round the Dengie marshes, with no escape routes, shade or resting place, and pitiless in hot weather. All went well I was pleased to hear. 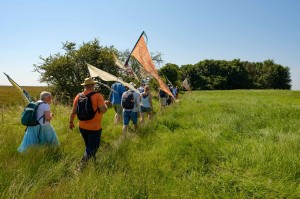 For more details about the Beach of Dreams and to follow the progress of the journey: https://beachofdreams.co.uk

To follow the illustrated journey day by day: https://arcg.is/1OXPiP0