When we build again

The annual Davidson Prize for the best new ideas in housing has just been won by a small consortium including architect Charles Holland, artist Verity Jane-Keefe, the Quality of Life Foundation and Joseph Zeal-Henry. The theme of this year’s prize was co-living – more collective and flexible forms of communal housing design – and the winning team focused on rural renewal on brownfield sites. Here’s their pitch:

Rural areas in the UK suffer from a shortage of affordable housing and are overly reliant on a narrow but ubiquitous development model – often leading to atomised communities of single-family units in car-dependent cul-de-sacs.

Co-Living in the Countryside proposes instead a new type of shared, communal housing to re-invigorate rural communities and attract new and more diverse residents. Addressing community, character, governance, affordability, sustainability, employment, health and wellbeing, the design focuses on solutions for a typical site for new housing within the South Downs National Park. In a new model of co-operatively managed and owned co-housing, individual units are connected by shared facilities such as kitchens, dining rooms, offices, studios and gardens.

The idea is that residents share space, resources and household tasks including gardening and childcare, with shared space and facilities for visiting friends, extended family members and social and community use. The design aims to reduce the need for car ownership and the stress and loneliness of commuting by providing shared working spaces and transport.

A new approach to architectural language encourages owner-adaptation, customisation and personal choice as part of the design process. Takings its cue from experimental rural housing such as the plotlands and other self-build communities, the aim is to establish a new, dynamic model of co-living in the countryside. 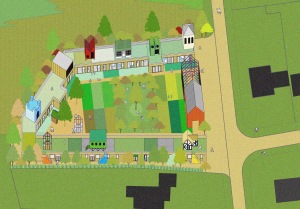 Davidson Prize Winner 2022: Detail by kind permission of CLIC (Co-Living In the Countryside)

Both Charles Holland and Verity Jane-Keefe have been involved in a variety of Essex projects over the past decade – Charles famously with his design for Grayson Perry’s A House for Essex, and Verity for her many projects in east London, including her outstandingMobile Museum in Barking and Dagenham, one of the most exquisite celebrations of popular history in a long time.  But neither of them are resting on their laurels: each has had separate exhibitions of their own at RIBA in the past year. If Essex is the social laboratory of modern Britain, then Charles and Verity are currently in the engine-room.

This turn to the rural indicates that while theories of urban regeneration have dominated planning and social policy in recent decades, the climate crisis has refocused attention on what is happening in rural Britain, especially with regard to food production, the industrialisation of the landscape, factory farming, second home growth, the flight of young people to the cities, the pollution of rivers and seashores, and much else. This is evident in the current proliferation of books about rural regeneration: Bella Bathurst’s Field Work: What Land Does to People & What People Do to Land, Marina O’Connell’s Designing Regenerative Food Systems, Dieter Helm’s Green and Prosperous Land: A Blueprint for Rescuing the British Countryside, John Lewis-Stempel’s The Running Hare, George Monbiot’s Regenesis, James Rebanks’ An English Pastoral, Neil Ward’s Net Zero, Food & Farming, Isabella Tree’s Wilding, amongst others. But the question left unanswered is: what about the people in rural Britain – where and how will they live?  A recent RIBA report on age-friendly housing worried that, ‘Our small towns and villages are set to become retirement communities.’ Yet much existing village infrastructure – social housing, schools, churches, care homes, libraries, shops, voluntary organisations – is going to struggle to survive with a population consisting mostly of older people or second home owners. The social mix and resilience of rural life is as much an element in the sustainability programme as land use and biodiversity.

So much has happened in the past year since No Matter How Many Skies Have Fallen. The first edition has now sold completely out and a new edition will be back in print soon. The public interest in the story has been gratifying, most recently being BBC Radio 4’s broadcast of its ‘Open Country’ programme devoted to the history of Frating Hall Farm and a nearby companion settlement, the Othona Community at Bradwell. The programme is now available here.

One of a variety of self-build initiatives at the Othona Community, Bradwell

Also available online now is a short film of a walk from Wivenhoe to Frating I did with artist Michael Landy, part of a series commissioned by Firstsite Gallery, with other contributors being Maria Anastassiou, Gillian Darley, and Elsa James. It was great fun to do and on the day the weather held – just. This particular walk has become rather special, and when visiting Frating, I always walk there from Wivenhoe station: trains, bikes or walking boots being all you really need to travel these days on the mainland. Michael Landy was a terrific walking companion, and the film crew enjoyed it as much as we did. 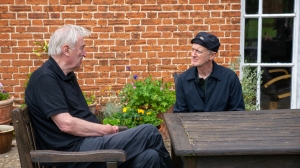 The lessons of Frating Hall Farm and The Othona Community suggest that if serious social and environmental changes are needed, then party politics alone cannot create, let alone sustain, the forms of collective endeavour needed to tackle the enormous problems associated with climate issues, social inequality, and a more meaningful rapprochement between town and country. The pioneers who established the Frating and Othona communities were sustained by a rich ply of political, social and religious beliefs, each one reinforcing the other. Tackling climate change is a moral issue as much as an environmental one. The title of the posting is taken from a book by Colin Ward, who would have been delighted I am sure to have been alive to catch up with all these initiatives.