Dancing in circles and dancing in lines 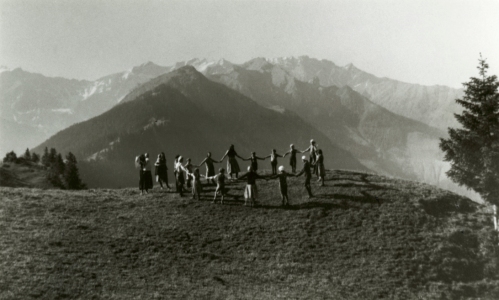 I enjoyed meeting Anna Neima last week, author of The Utopians, a new book about 20th century experimental communities, currently attracting wonderful reviews. Published in the same month as my history of the Frating community, it was a relief to find that we were both working towards the same understanding: of how idealistic ‘experiments in living’ rise and fall – while invariably exerting a powerful after-life. They often seed yet further attempts to find that elusive ‘art of living together in harmony’, which Aldous Huxley thought the most difficult of all the arts of the social world.

As with the origins of Frating, Neima’s own stories of ‘six attempts to build the perfect society’ – in India, England, Japan, France, Germany and America – were all responses to the catastrophe of the First World War. It was an era when people the world over began searching for what William James, in The Varieties of Religious Experience, described as ‘the moral equivalent of war’. There had to be other ways in which people could demonstrate citizenship, self-sacrifice, and community without resorting to nationalism or bloodshed.

Underpinning most of these experiments was a commitment to pacifism, and a return to self-sufficiency through experimental forms of agrarian settlement. There was often a connection to Theosophy, a once-influential hybrid of world religions allied to psychological theories of individual self-actualisation, which attracted adherents from all walks of life and countries in the early 20th century. Finally, the lives and writings of three major figures from the previous century, William Morris, Leo Tolstoy and Rabindranath Tagore also played an important part (as did the work of D.H.Lawrence for the Frating community, but that’s a separate story).

It is Tagore’s school and study centre, Santiniketan-Sriniketan, in Bengal, which opens Neima’s book, and is perhaps still the most successful and influential of all model communities, its former participants including film-maker Satyajit Ray, economist Amartya Sen and, the woman who would later become Prime Minister of India, Indira Ghandi. It also inspired the English philanthropist Leonard Elmhirst – having visited Tagore’s project – to establish with wife Dorothy, the Dartington Hall settlement in Devon. This was a progressive school, agricultural settlement and crafts centre and forms the subject of the book’s second case study. The others were Atarashiki Mura’s rural commune in Japan, Gurdjieff’s Institute for the Harmonious Development of Man in France, the Bruderhof in Germany (still well established in the UK), and finally Trabuco College in California, for a while the home of Aldous Huxley.

Anna and I agreed that ideology alone was rarely enough: the more successful often had a religious aspect to them, seeing the personal development of members as being of equal importance as the cultivation of a collective spirit. These usually came together in recreational time, when singing and dancing, along with rituals such as harvest suppers, birthdays, and other calendar events were celebrated.  As the extraordinary photograph of a circle dance by the Bruderhof in Liechtenstein in the 1930s shows, time for play was vital, similarly evident in the photograph portraying a festive line dance in the big barn at Frating Hall Farm in the late 1940s. 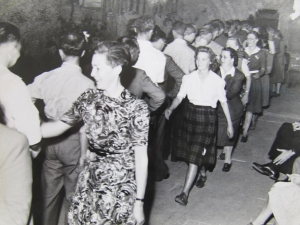 Folk dancing in the barn at Frating Hall Farm, circa 1950

We also discussed the dangers of investing too much in building a grand architectural template for a new way of life, by formalising in bricks and mortar aspirations which remained to be tested in everyday working out. Tagore’s Santiniketan-Sriniketan was a mish mash of old and new buildings, usually constructed by volunteers on site often without plans or drawings, of which Neima writes: ‘Tagore’s community looked like it had been built of fragments gathered from across the world.’ Likewise, Frating made up their settlement out of existing buildings, barns, and workshops, supplemented by a small collection of modest cottages built by their own building team, all of which are still to be found there, and in use, today.

At Trabuco in California, Neima suggests, ‘it was the visitors rather than Trabuco’s participants who carried (Gerald) Heard’s ideas out into the world, giving the community a resonance far beyond its boundaries.’ The same was true at Frating, where its many visitors wrote some of the most enthusiastic accounts of life there. It might have been a different story had they been present only during the depths of an East Anglian winter, rather than in the spring and summer months of sowing and harvesting. Nevertheless, the after-life of the Frating story remains as inspiring as ever. 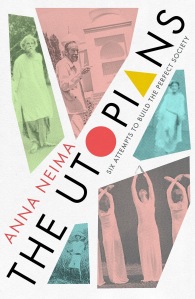 It was very gratifying that our two books were published at the same time – and were appreciatively reviewed as such by Olivia Laing in the Times Literary Supplement recently – as in many ways they were in conversation with each other, though neither of us was to know that at the time. As life begins to re-adjust to the new conditions of a post-Covid (and soon to be post-Cop26) world, new ways of thinking about how we might live more equitably and mor sustainably, may at last gain a sense of urgency.

The Utopians by Anna Neima

No Matter How Many Skies Have Fallen by Ken Worpole

Ken in conversation with historian, Patrick Wright on YouTube